The Wolfman features an interesting scene where Lawrence (Benicio Del Toro) attempts to protect a young gypsy who is being pursued by a mysterious creature and has taken refuge in the fog amongst a group of ancient vertical stones. The sequence begins on location outside London in a gypsy camp at night, then transitions to the stones set built on stage. Because we needed a controlled environment to contain our atmospheric fog effects, we shot this on H Stage at Shepperton Studios. For those of you who have shot on this stage, you know exactly what happens to smoke effects in the afternoon when the cold ground meets the growing heat building up at the top of the stage. Absolutely fantastic smoke layering effects that look completely incredible. All of our night cloud sky effects were not Visual effects… but rather standing layers of motionless smoke in the air. I’ve shot on this stage a dozen times and it’s the same phenomenon every time. It’s an old metal building with a few holes in it. I hope Shepperton never changes anything about that old stage.

The amazing gaffer John “Biggles” Higgins rigged an open-face 18K HMI and a cluster of diffused maxi-brutes surrounding that light through an 18-foot hole we located in the painted backing. This allowed us to have both hard and soft lighting coming from the same direction so that we may have a hard punch of backlight through the smoke, while the soft backlight created by the maxi’s spread our pattern and kept it from getting too theatrical. We did only a little augmenting otherwise… maybe just an occasional soft push for faces… but otherwise quite simple. Key Grip Gary Hymns operated the TechnoCrane with his son, Paul. 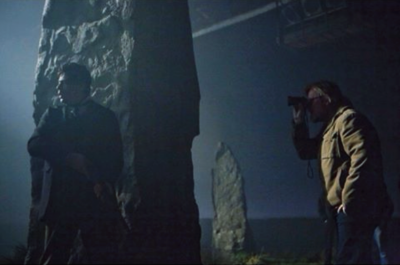 He, along with operator Des Whelan and First AC Julian Bucknall could move the camera just about anywhere with  precision. Of course, it was extremely difficult movement. They are just good enough to make it appear effortless. I like to use a small handheld viewfinder and mark our lens positions on the ground. We decide on a post position for the crane based in those marks (considering space, arm sweep and where I propose to place lighting so that the arm can avoid a collision with Biggles’s equipment), then lay the shot out over those marks… Mark the arm then start playing. I’ll always try to start with a marked shot when working with the TechnoCrane so that we don’t waste time “hunting” for a shot with a complicated piece of equipment.

When shooting our scenes around the gypsy camp at night, we had firelight and overhead sources in around the wagons of the camp, then back lit the surrounding hills with dozens of Dino’s and 20Ks just over the horizon, out of view of the camera but lighting the smoke we sent up around the hillside. At one point, Director Joe Johnston needed a shot of Benicio running towards the trees and standing stones, where we would later hand off to our stage set. Because the hillside was lit as background for the foreground camp, when we went to the base of the hill there was no light there. In fact, with the smoke machines off and our lights hidden behind the horizon, it was pitch black. We happened to have a great SFX team lead by Paul Corbould. They were able to drive their smokers and gas powered ritters (which were mounted to 4-wheel drive trucks) and get enough smoke in the sky and create a cloudscape that was catching all the light I had pouring into the air. That little glow near Benicio’s knees are 6 Dino’s pounding in from a few hundred yards away… And the trees to the right have five or six 20Ks hidden amongst them. So, there was massive amounts of light up there… They just needed to get their smokers in the right place so they could feed this shot. Joe is very understanding at times like this and when he sees a crew working hard and they are working on a plan he himself believes might be viable, he is as patient as a Director can be. All I know is that the Corboulds made me look very very good that night.